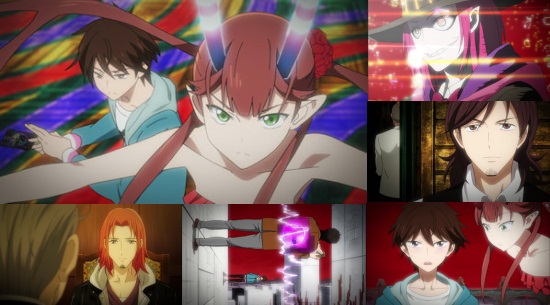 We had some harsh things to say about the early episodes of C: Control - The Money and Soul of Possibility when we first looked at it earlier on this season (although let's just call it [C] from now on, shall we?), but despite those occasionally strong works against the series we did have to concede that its core idea has plenty of promise - an important point of note for potential growth within this money-obsessed series, offset by the risk of critical bankruptcy.

Even as we enter the show's fourth episode, we still find ourselves learning about the world of the Financial District and its impact upon the real world - in this case via an intensely personal "Deal" for Kimimaro which drives home what soon makes itself apparent as the true, core concept of [C].  Rather than a struggle between good and evil, the Financial District ultimately makes itself known as a conflict between the present and the future - the Financial District's Midas Money is produced using the future of Japan and its people as collateral, with losses during Deals inflicting real life loss beyond the mere economic.

Thanks to this key concept, we finally find somewhere to slot entrepreneur Mikuni Soichiro into the mix, as his so-called "Starling Guild" sets out its stall to minimise the impact of the Financial District upon the real world - a laudable goal in initially seems, but at what cost?  It's this question which puts our protagonist Kimimaro at a crossroads, illustrated by further encounters within the weird world of the Financial District that puts him directly into contact with (and at the centre of) the occasionally devastating real-world consequences of his actions.  With the economic system around the world beginning to creak under the strain of the system now embedded within its very heart, it's up to the main players within this tortuous system to choose the future of Japan and beyond.

Reading back over those previous two paragraphs, it makes [C] sound pretty tense and exciting, doesn't it?  In fairness, there *is* some tension to be found during the final couple of episodes of the series in particular, but again we also find ourselves having to sidestep a number of flaws with the show and its presentation to really drill into it.  Although [C]'s visuals are initially eye-catching and expressive, the overall quality of the presentation (and particularly its ropey CG) makes for a hit-and-miss affair aesthetically, but more importantly aspects of the series simply don't work very well.  Arguably topping this list is Kimimaro himself, who is understandably little more than an unsure, self-conscious observer when he first enters the Financial District, but even by the end of the series it still feels as though he hasn't made any major decisions for himself thanks to his tendency to get swept along with whatever rousing speech is presented before him by another party as events progress.

Similarly weak aspects of the series include Mikuni's back story (which is thrown in while adding little to proceedings) and the concept that Assets are a representation of their owner's future - this is a cute idea which serves as an important point to Kimimaro and his relationship to his own Asset, Mashu, but it doesn't really seem to have been given much thought to most of the other characters bar Mikuni's Asset, Q.

These oversights and weak characterisations unfortunately serve to strip a lot of the drama which should be inherent in the latter part of the show - more bluntly, it's difficult to care about the future of Japan and the wider world come the end of the series because we never feel any real investment in any of its characters.  In fact, some aspects of the series seem to be forgotten almost entirely, with Kimimaro's love interest fizzling out to the point where she's merely used as a cipher for Japan's malaise - replacing her with a sign saying "things are good" and "things are bad" would have achieved the same effect while also saving money on the animation budget.

Its implementation might be lacking in several key areas, but for all of its foibles we have to confess to still holding some love for [C] at its core - its allegorical take on the financial world is a fantastic concept and even its rendition of "business as Pokemon clone" works surprisingly well within this framework.  As it goes about exploring its setting and bringing us to its eventual moral dilemma of rescuing the present from turmoil versus looking to the future, it creates a whole world of topics for philosophical discussion and musings over a pint or three, and any anime series that can make you consider the world's current economic climate in more ambitious terms than just apportioning blame or slating the system has to be worthy of at least some glowing praise.  If only [C] had managed to live up to its lofty ambitions and goals and succeeded in creating something that more people wanted to talk about, then we'd be staring in the face of an absolute classic.  As it is, [C] certainly serves up some interesting fare, which makes the fact that it's dulled by a disappointing delivery all the more frustrating.

You can currently watch C: The Money of Soul and Possibility Control in streaming form via Anime on Demand.